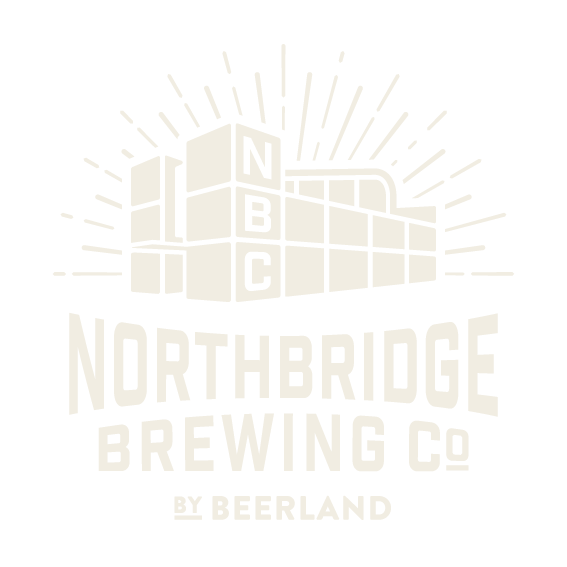 WA Craft Beer encourages a certain boldness and willingness to innovate within the industry. Master Brewer, Ken Arrowsmith produces a full range of beers onsite in Beerland’s 12HL brew house. After 18-months of trials this award-winning Beerland core range of Pale Ale, Lager, Wheat Beer, Kolsch and IPA was established. In addition to the core range, Ken and the brewing team have produced over 40 different seasonal small batch styles, try our latest today!

Beerland beers available at WBC have won numerous awards around Australia, including most recently Champion Australian Beer for our Beerland Wheat Beer at the Australian International Beer Awards.

An aromatic blend of Galaxy and Cascade hops introduced at different stages of the brewing process, showcases aromas of tropical and citrus fruits balanced by a grassy hop bitterness. It has a light to medium body with a lingering finish that leaves you wanting more.

The addition of noble hops to the kettle provides this lager with a crisp and refreshing bitterness. Imported German malts adds complexity and a subtle sweetness whilst staying true to the style of a classic lager - perfect for a hot Summer’s day. Or any other time!

This well balanced, slightly hazy golden IPA contains an abundance of Mosaic and Galaxy hops resulting in tropical, citrus and pine aromas and flavours. A solid bodied beer that takes over the palate with a firm bitter dry finish.

Named after the locale of the Northbridge Brewing Co, our New England inspired pale ale returns. With all the hallmarks of a tropical fruit juice, pouring a thick golden haze with pineapple, passionfruit, orange and mango on the nose.

A silky mouthfeel from oats and torrified wheat lend to a surprisingly dry finish, with just enough bitterness to let you know
its still beer.

Our favourite juice has sharpened its claws to invade your dreams with razor pineapple, orange, mango and passionfruit manifested from a triple dry hop. An invisible force of ale malt and unmalted grains summon a big bad mouthfeel, with slashes
of booze and bitterness to leave you craven of an empty glass.

Pouring a hazy pale orange, aromas grow from bright stone fruit and citrus into notes of sweet nectarine. Carbonation lends to gentle hop flavours and malty undertones, whilst the dry body and crisp bitterness leaves your palate refreshed and ready for more.

Straight off the bat with Australian pale, wheat and cara malts for that full beery taste and mouthfeel we all love. A smattering of Cascade
hops in the kettle and an El Dorado dry hop present a familiar refreshing bitterness, while only tasting a little bit like flowers.

Taking inspiration from one of our favourite vintage beers, this American Strong Ale celebrates West Australian producers utilising fresh whole hops. Straight from our good friends at Great Southern Hop Co and into the beer in however long it takes to drive back from the beautiful south coast. With just a little bit of bittering hop to balance, we’ve smashed a solid malt foundation with 10Kg of Cascade and Chinook flowers into some sweet biscuity wort on its way to the fermenter. Expect candied orange marmalade and fresh cut grass with nutty undertones and a lingering bitterness.

A brilliant, pale straw colour in the glass with generous carbonation and a thick white head this is an invitation to refreshment. The aroma is, not surprisingly, tropical fruits with mango clearly evident though citrus notes avoid any cloying sensation. On the palate the fruit salad gives way to a smooth wheat beer character with modest bitterness and then a dry finish that ensures drinkability and will really quench a thirst on a hot day!

946ML cans of our core range and limited edition 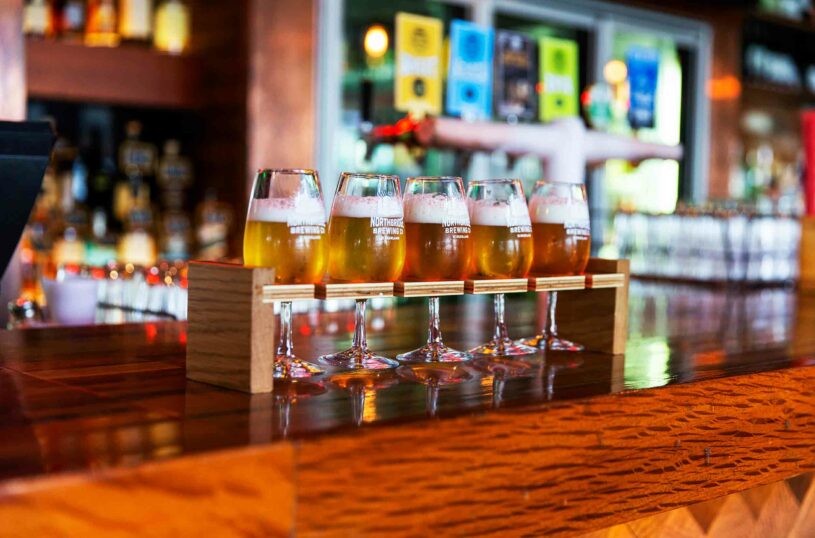 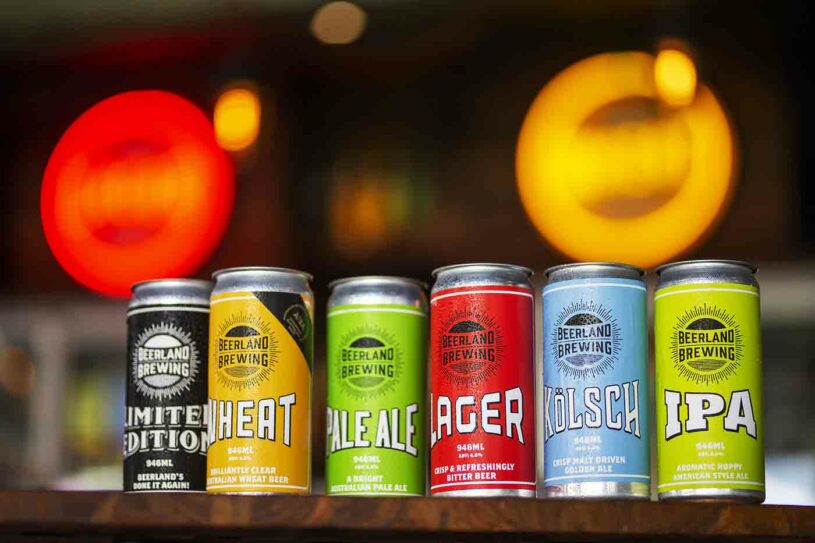 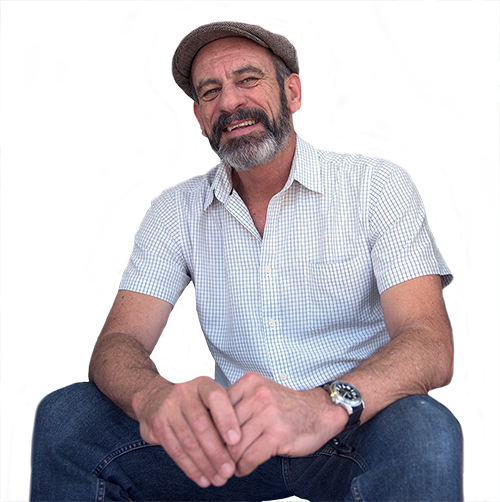 Under the careful eye of our Head Brewer and Fellow of the Institute of Brewing and Distilling, Ken Arrowsmith, Beerland brews its beers onsite in its 12HL brew-house. Beerland’s core range consists of good beer in a variety of styles such as Pale Ale, Lager, Wheat, Kolsch and IPA.

Ken has been responsible for some of the best beers in Australia. ‘Hopping’ between both Beerland’ brewpubs, Ken brews with great skill and finesse having a Bachelor of Applied Science (Chem). He is an active member of the Institute of Brewing and Distilling (IBD) and in 2004, Ken was awarded the prestigious IBD Fellowship.

A vet of the industry, Ken’s brewed for more than enough breweries throughout his lifetime including Tooheys, South Australian Brewing Company, commissioning and operating of The Old Lion Hotel in North Adelaide, Director of Operations at the Swan Brewing Co right where he started as an Assistant Chemist.

Ken and the brewing team produce a wide range of seasonal small-batch craft beers from dark lager, Get Schwarty – a malty dark beer brewed in the traditional style of a Schwarzbier – to a fruity twist on the classicly European style of Sasion in Taking the Pith, to the latest batch of tropical James Street Juice – a New England inspired pale ale has all the hallmarks of a tropical fruit juice, pouring a thick golden haze with pineapple, passionfruit, orange and mango on the nose.

Ken enjoys playing a bit of soccer, basketball, and even kite surfing – in addition to tasting beers of all styles and provenance.

We also offer a full bar,
with other beer, wine, spirits and cocktails! 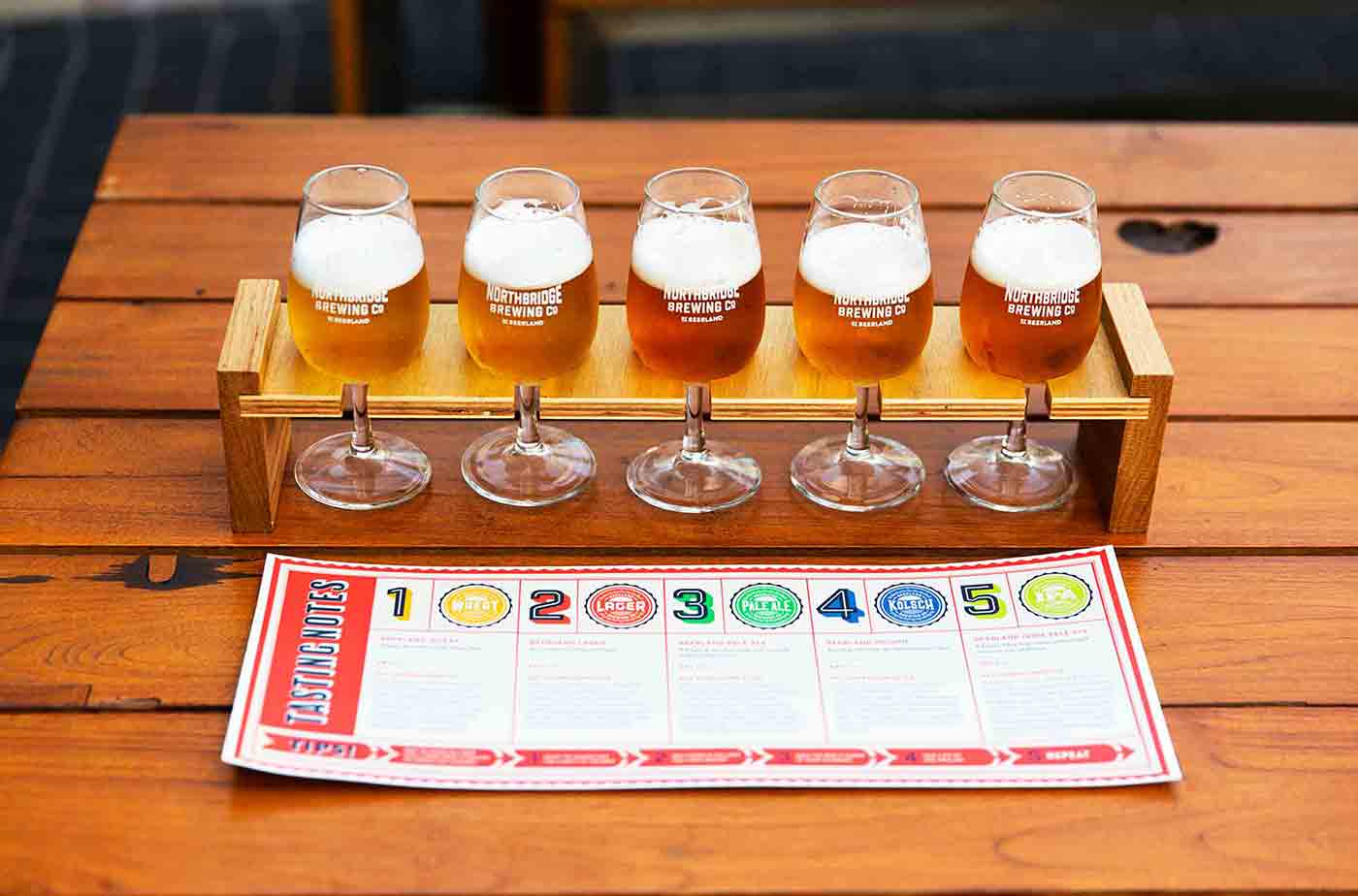 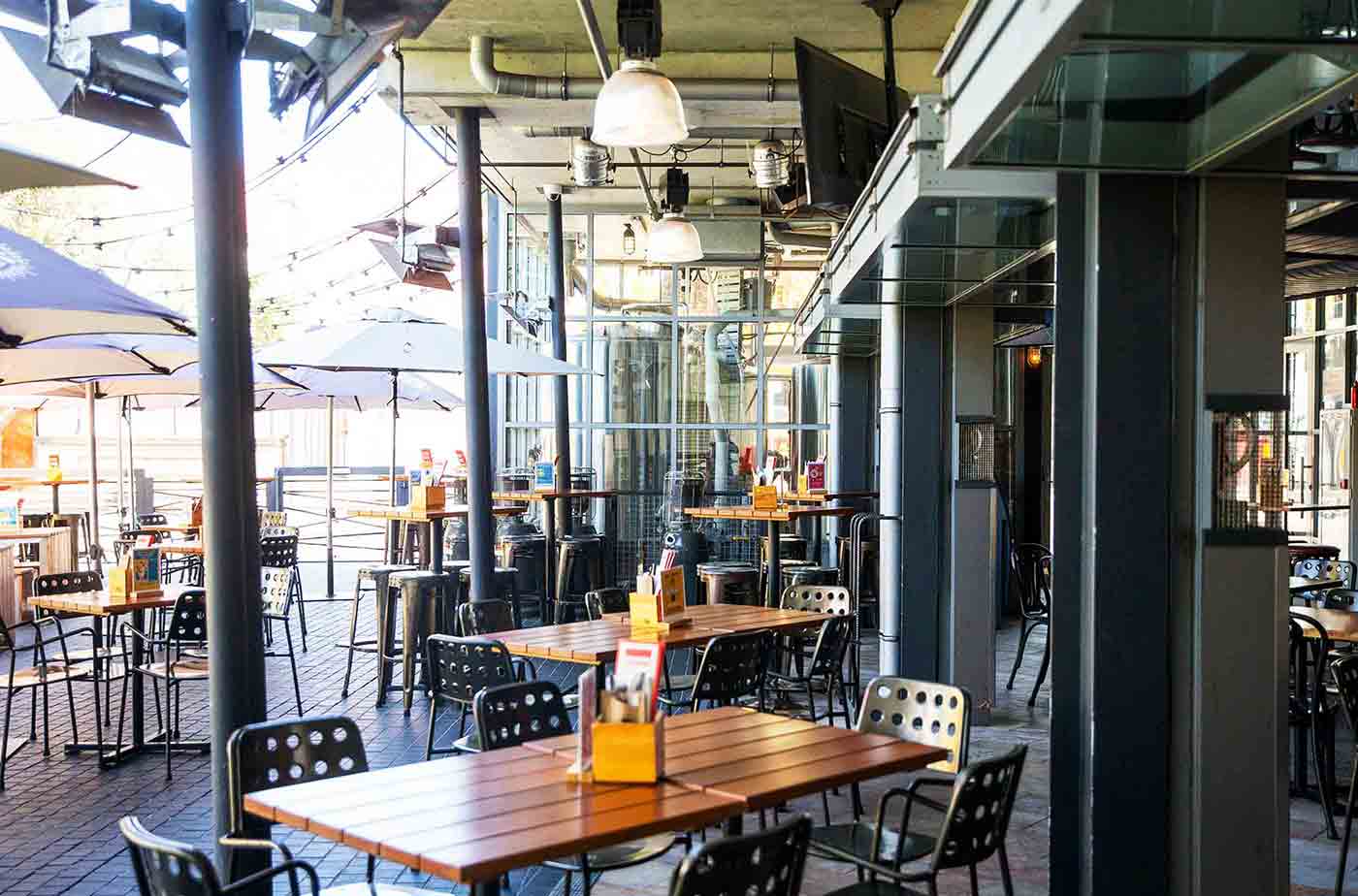 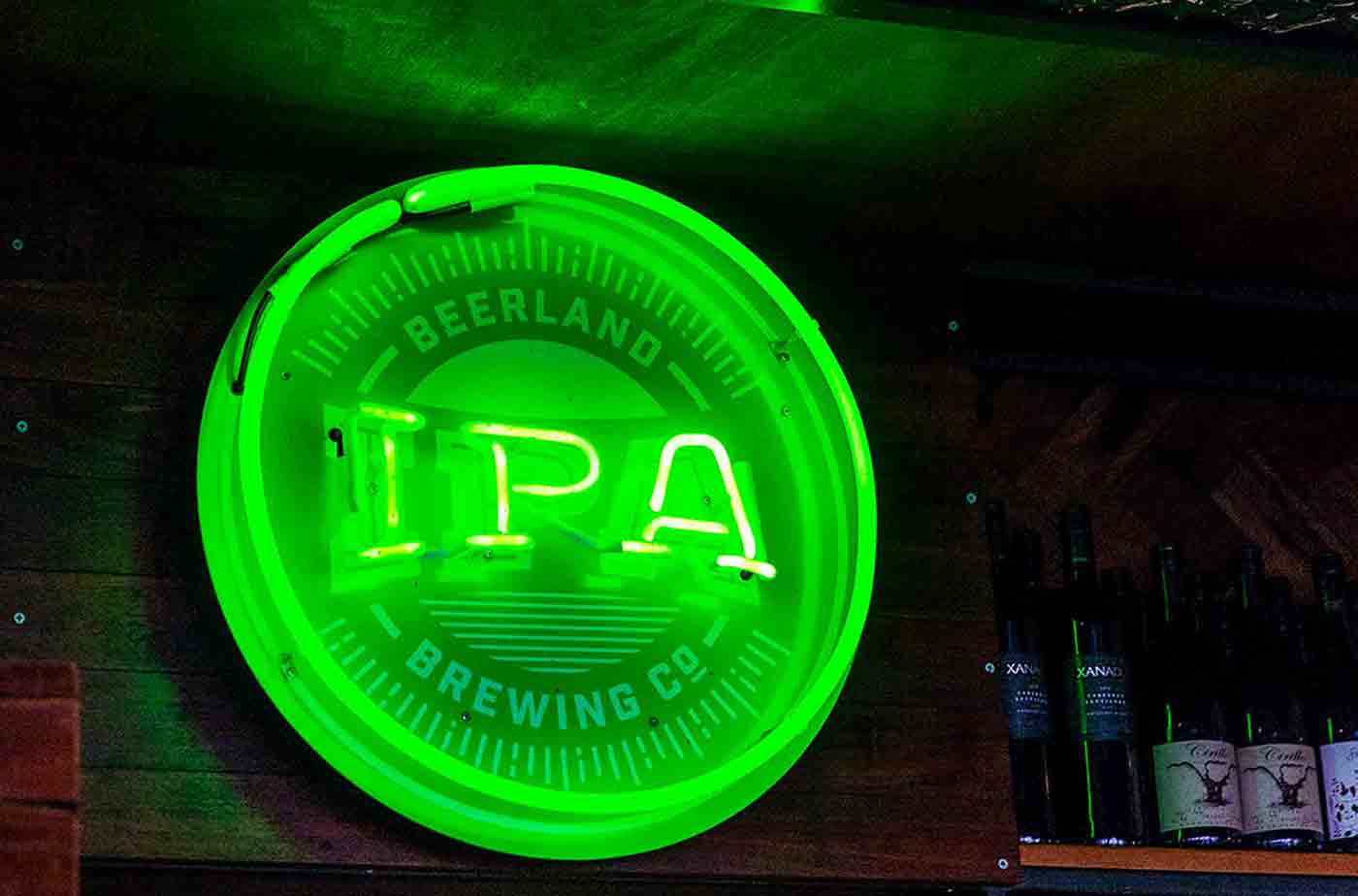 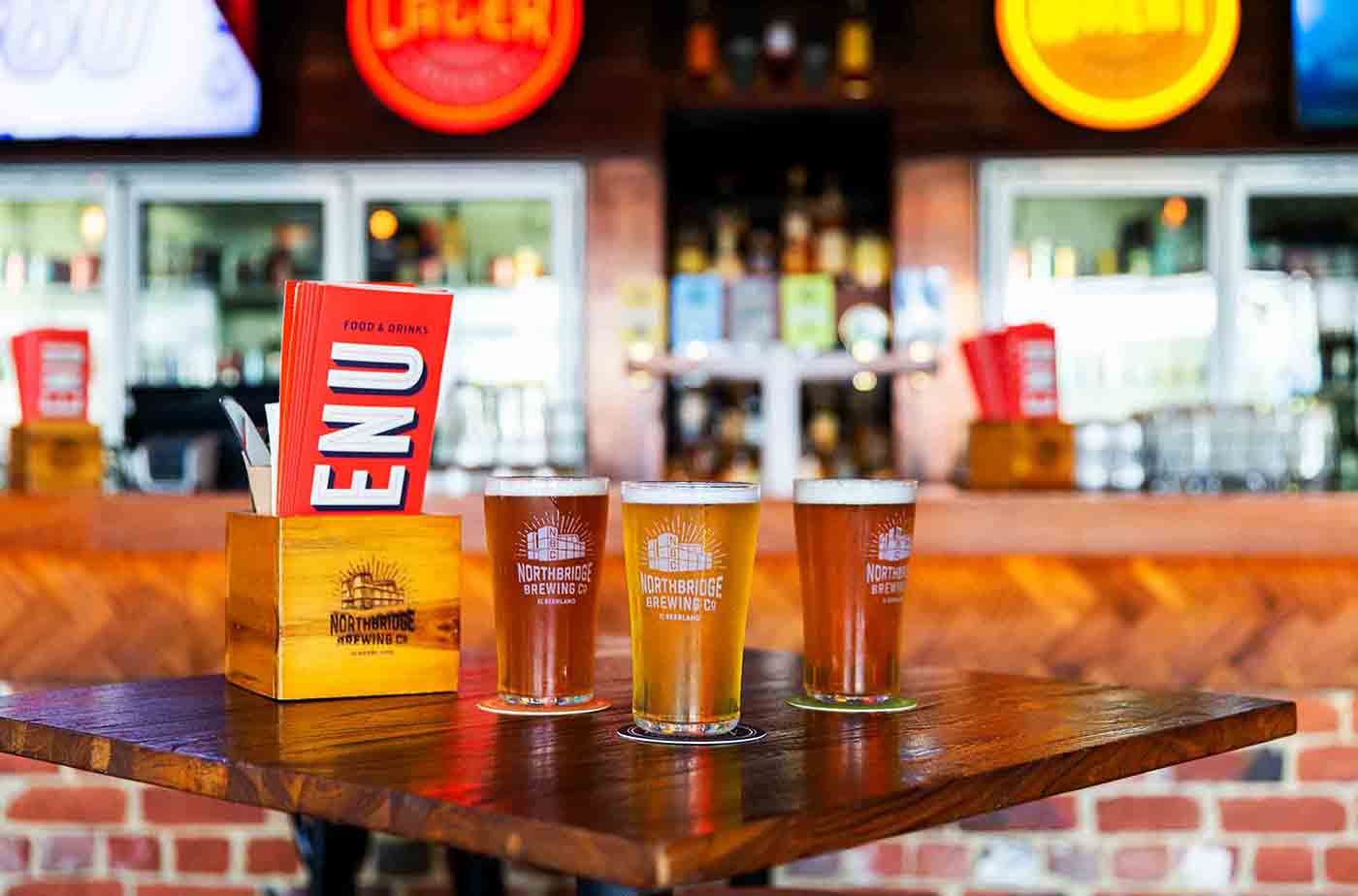 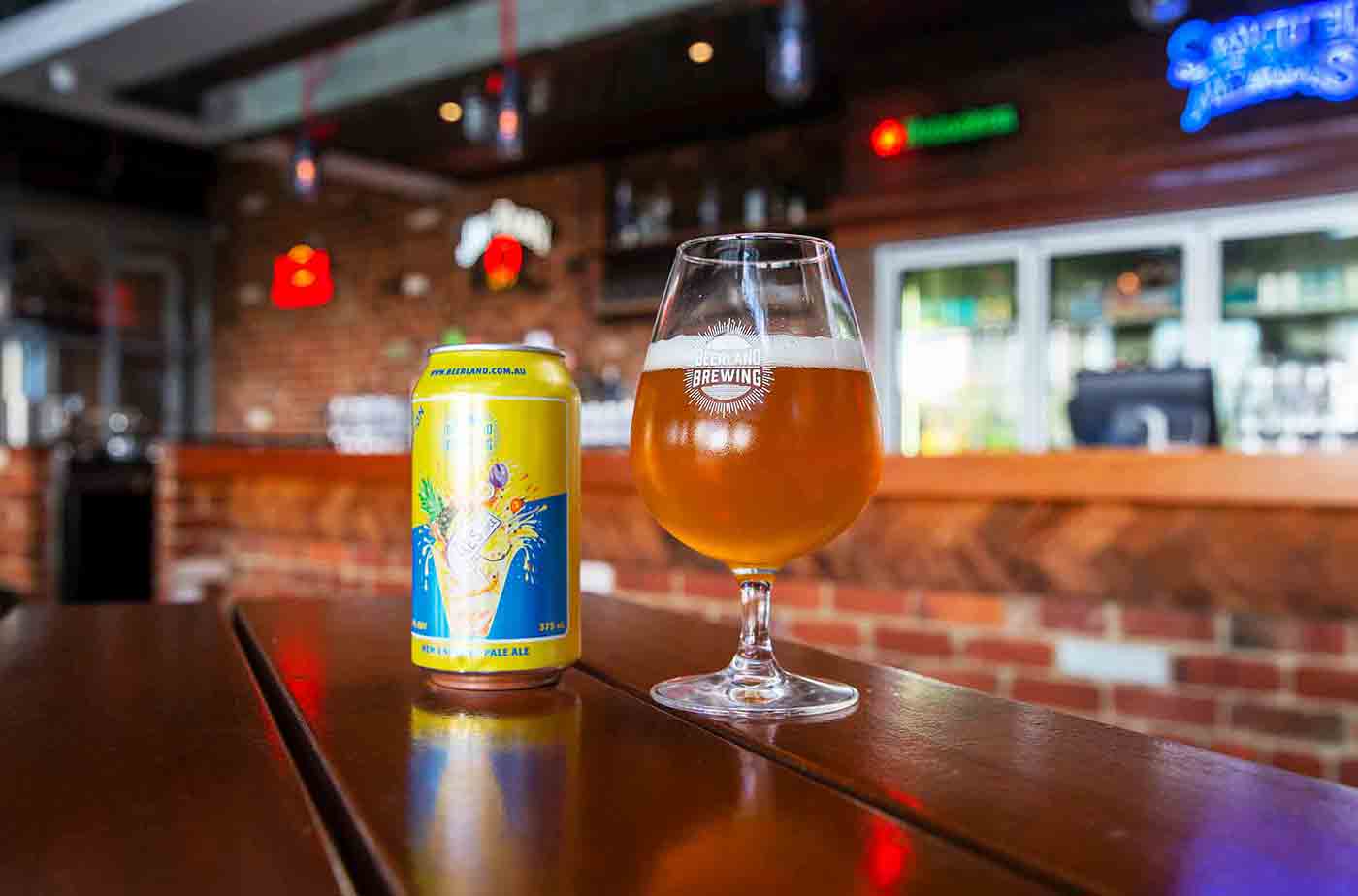 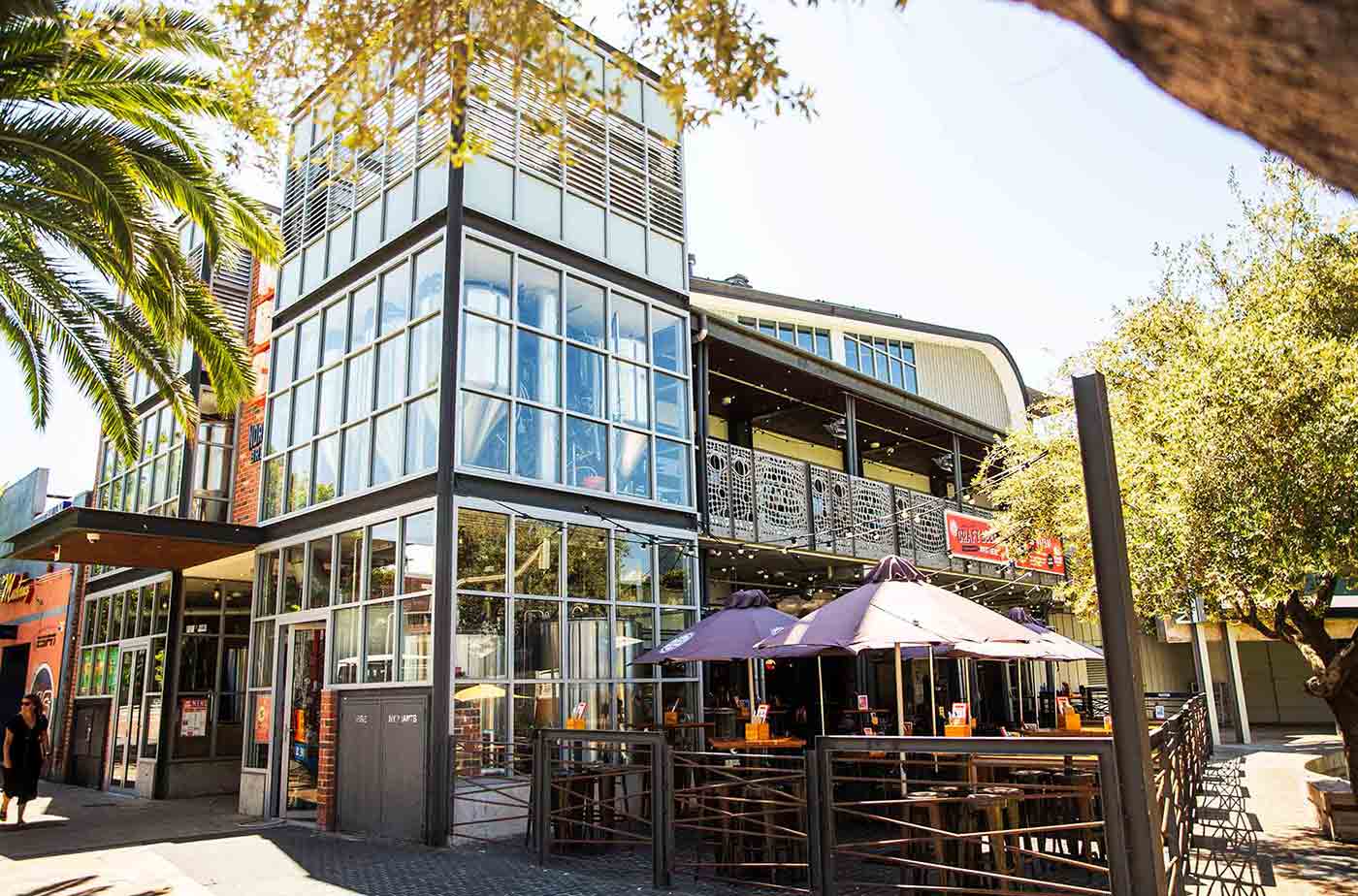